1997 Arsenal Away Retro Soccer Jersey Classic design away shirt worn by Vieira in the 97-98 Double winning season and the following campaign. Vieira played 93 games over the two seasons and his blossoming partnership with French countryman Emmanuel Petit secured both players a piece in the 1998-99 PFA Team of the Year 1994-95 Blackburn Rovers Home Retro Soccer Jersey are very well designed: the simple blue and white half design always looks great, and the year they won the Premier League coincided with the most beautiful jersey with team history. The logo looks so coordinated to some extent The new jersey is made with the concept of "OSAKA IS OURS" (Osaka is ours) and expresses the close connection between the team and the city by adding geometric patterns derived from Osaka's landmark buildings. Based on the classic combination of cherry blossom powder and navy blue, the geometric stripes added on the front of the jersey are derived from the two landmarks of Osaka-Osaka Castle Tenshukaku and Tsutenkaku, expressing that this team is rooted in the city of Osaka, on the stadium The determination to defend the city for honor.

In addition, the geometric stripes on the front of the Cerezo Osaka Soccer jersey also cleverly constitute the pattern of the team's mascot-the wolf. The geometric pattern on the back of the jersey is inspired by the "cherry blossom" in the team name. Navy blue on the shoulders and sleeves makes this jersey more powerful. Navy blue shorts and ball socks together form the new home image of Osaka Sakura in the 2020 season.

Japan Tokyo Football Club (hereinafter referred to as FC Tokyo) and sponsor umbro jointly launched the team's new home and away jerseys for the 2020 season. The new jersey built around the concept of "Keep doing" shows the club's new concept of "going to the future with a sense of mission" in the new season. 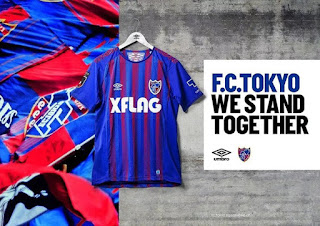 In 2020, the much-anticipated Summer Olympics will be held in Tokyo, which is bound to become the focus of Japan and the world. As FC Tokyo, which connects the Japanese capital Tokyo with the world, the team hopes and is willing to go to the world and "grow" with the city in the future. The new home jersey continues to debut with the iconic blue and red striped shirt. The dotted stripes designed based on the concept of "Keep doing" not only form the blue and red stripes that symbolize the club's tradition, but also express the team's hope to become an orderly design. The desire of a successful team that keeps winning.

FC Tokyo Soccer jersey 2020 Home is paired with blue shorts and red socks. The umbro diamond chain in deconstructed form is added to the shoulders and sides of the shorts, giving this new jersey a new image that is classic and modern. 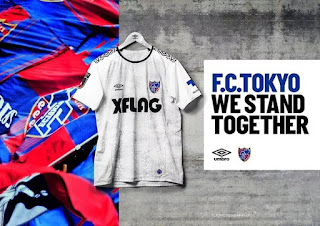 The FC Tokyo 2020 away football jersey, which is dominated by white and decorated with black details, also has a pattern of dotted stripes. The cloud-like pattern of silver dotted stripes creates a calm and calm image of the player, showing even Surrounded by various pressures, the players still have a firm desire to survive for victory.

Umbro and Japan's Osaka Gamba Football Club announced the team's new home and away jerseys for the 2020 season. The new jersey designed with a new concept allows people to feel the traditions and culture from Osaka and Japan during the Olympic year.

Osaka Gamba Soccer jersey 2020 is based on the new design theme of “Tradition G ～ 伝 统 あ る チ ー ム と し て 再 び ～” (Gamba's tradition ~ to become a traditional team again ~) The new season's home jersey inherits the team's iconic blue and black stripe pattern to show the team's tradition. The blue and black stripes on the new jersey use a wide and narrow design to perform a new interpretation of tradition. Such a bold style and appearance show the team's firm determination and desire to adhere to the traditional football style and integrate more aggressiveness in the new season. 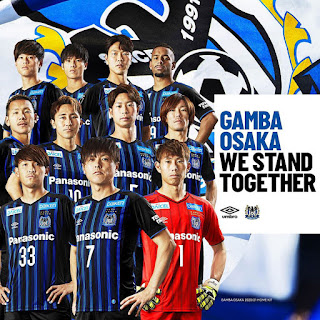 Japan's Hokkaido Sapporo Gonzado Football Club and sponsor Kappa jointly announced the team's new home jersey for the 2020 season. The new jersey designed to return to the traditional style expresses the team's desire to go further in the new season.

Hokkaido Gonzado Sapporo Soccer Jerseys 2020/21 has returned to the classic red and black striped shirt style, full of traditional styles of stripes are used to represent the fighting spirit of fire like Gonzado Red and Gonzado Black from the vast earth The composition of the colors shows the club ’s respect for tradition and the goal of working hard to return to the original season. Like the jerseys of previous seasons, the new jersey added a Hokkaido map behind it, expressing the team's determination to defend the honor of Hokkaido football.

Black ball pants with red stripes and ball socks together form the complete home image of Sapporo Gosado, Hokkaido for the 2020 season.

PUMA and Japan Júbilo Iwata Football Club announced the team's new home and away jerseys for the 2020 season. The new jersey built around the concept of "IWATA IS OURS" (Iwata is ours) demonstrates the close connection between the club and Iwata City.

Júbilo Iwata ’s new season home jersey design was inspired by the urban characteristics of Iwata, Shizuoka Prefecture, where the club is located. As the seat of Yamaha Corporation of Japan, the machinery industry became the name card of the city.Júbilo Iwata’s home and away jerseys for the new season are inspired by this. In addition to continuing the traditional colors of the club, the front of the new jersey includes three light birds from the club badge and its symbolic sun, moon and star patterns, and the patterns are geometric stripes The outlined mechanical image is presented. In addition, blue vertical stripes representing the four main rivers flowing through Shizuoka Prefecture, including the Tenryu River, were added to the left side of the front of the home jersey.

The new season Júbilo Iwata Soccer Jerseys home is still presented in traditional sky blue, while the away jersey has the same traditional white appearance. Along with the home and away jerseys, there are also new season goalkeeper jerseys. The goalkeeper jerseys are also designed with mechanical patterns that show regional characteristics and are shown in a more low-key dark blue.
发帖者 GoGoalShop 时间： 3:01 AM No comments: