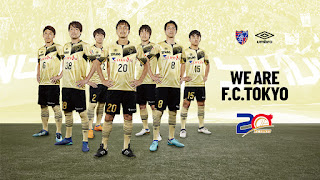 The new FC Tokyo Club's 20th Anniversary Jersey is made with the same template as the away jersey and introduces a distinguished golden appearance to celebrate the important moment of the 20th anniversary of the football club from the Japanese capital. V-shaped gradient stripes are added to the FC Tokyo Soccer jersey chest, making this golden jersey like a "gold armor" worn by a medieval knight. 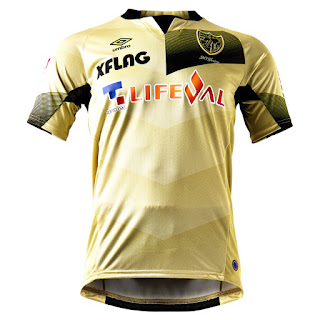 The fabric used in this commemorative jersey was provided by Japan Teijin Co., Ltd. The fabrics are from the plastic bottles collected from the "ECO パ ス プ ロ ジ ェ ク ト in 味 ス タ" event sponsored by the FC Tokyo Club and its sponsors.

For the first time, the chest logo was presented in black and gold. The white "20 years" was added under the team logo to commemorate the important moment of the 20th anniversary of the club.

The jersey features a chic V-neck with black rib patches and black trim, creating a solemn and elegant image. The shoulder of the jersey adds umbro's signature golden “diamond chain” to further create a festive atmosphere at the important moment of the 20th anniversary of the club
发帖者 GoGoalShop 时间： 11:53 PM